This pub med article focuses on the  many  positive physiological responses of the body to the metabolic switch which occurs during fasting.  We are shown how the body uses its own body fat to nourish our tissues, our organs, our brains and our muscles!

*While this article will use the term “Intermittent Fasting” (IF) it is specifically discussing an IF regimen that is long enough to induce the “metabolic switch.” Which, can be found in Table 1 along with the definition of terms used to describe different types of eating patterns in this review. 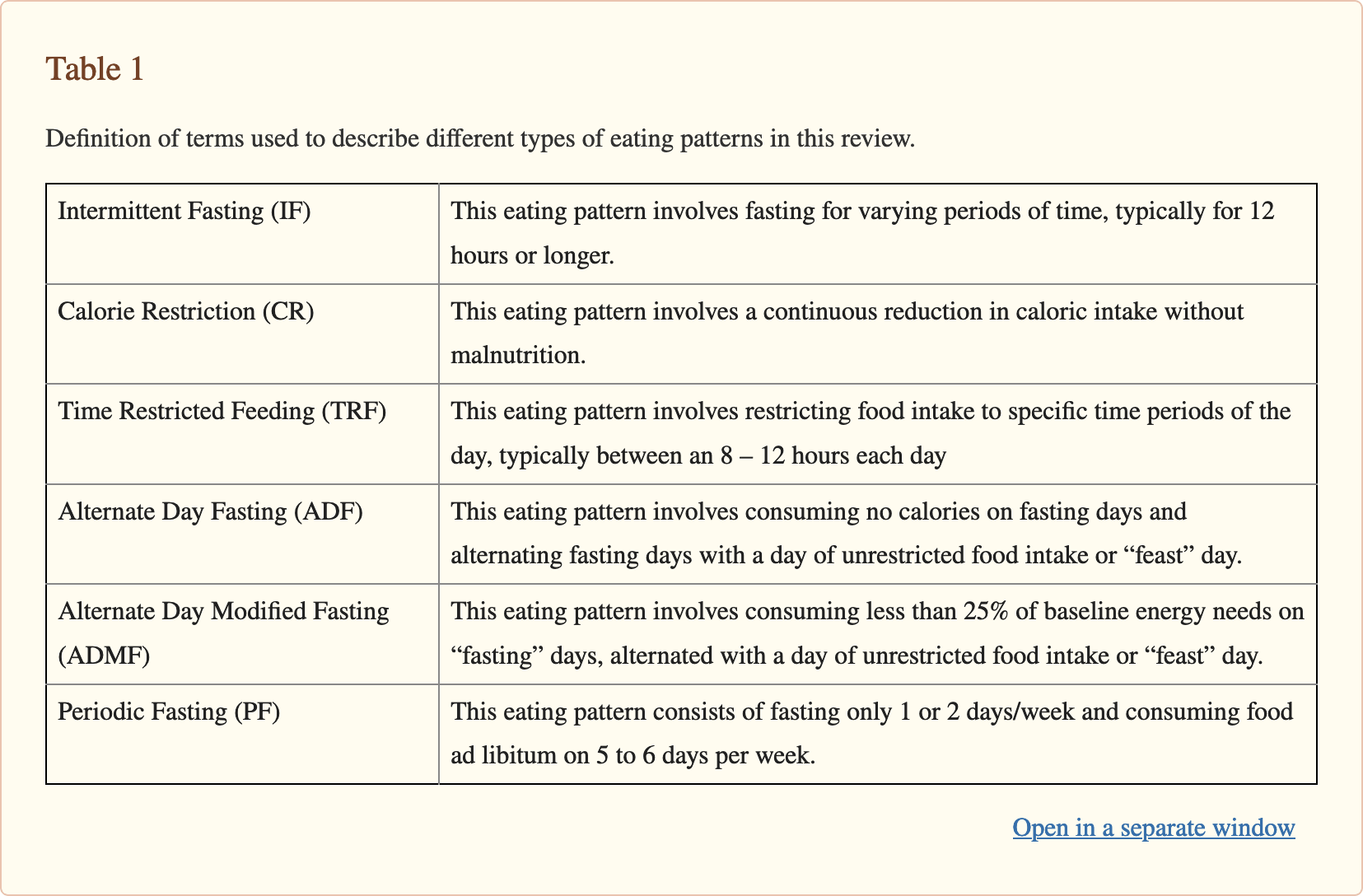 Numerous studies have shown ADF can protect neurons in the brain against dysfunction and degeneration in animal models of a range of different neurological disorders including epilepsy, Alzheimer’s disease  Parkinson’s disease and stroke .

What is the metabolic switch ?

The metabolic switch is the point of negative energy balance at which liver glycogen stores are depleted and fatty acids are mobilized by the body. (Typically beyond 12 hours after cessation of food intake).

This switch is the  body’s preferential shift from utilization of glucose (from (glycogenolysis ) to fatty acids and fatty acid-derived ketones.

Recent research now indicates  ketones (produced from fasting and the metabolic switch) are the preferred fuel for both the brain and body during periods of fasting and extended exercise.

Here is a complex chart is a summary of the major metabolic pathways involved in the metabolic switch and responses of excitable cells to the ketone β-hydroxybutyrate (β-OHB). 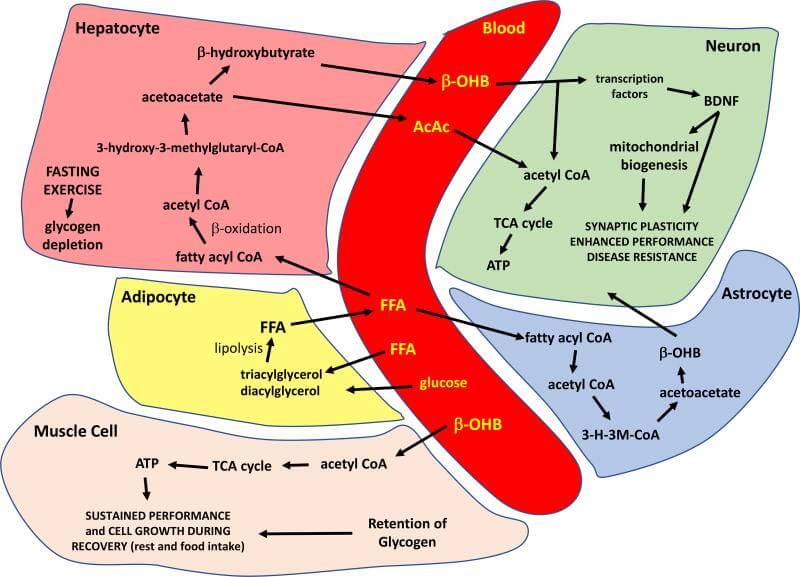 It is my understanding that, in essence, we are shown how the body uses its own body fat to nourish our tissues, our organs, our brains and our muscles!

Through fasting, the metabolic switch produced ketones that are transported in high amounts into cells with high metabolic activity (muscle cells and neurons) where they are metabolized to acetyl coenzyme A.

Acetyl coenzyme A is an enzyme that occupies a pivotal role in metabolism such as glycolysis, fatty acid β-oxidation, and amino acid degradation.

The TCA cycle (also known as KREBS Cycle) is initiated and finishes to generate ATP. This process plays a starring role in both the process of energy production and biosynthesis.

The ketones (that are generated during fasting) serve as an energy source to sustain the function of muscle and brain cells during fasting and extended periods of physical exertion/exercise.

It appears  that during this amazing switch , that the primary energy source for the body shifts from glucose to FFA (Free Fatty Acids) derived from adipose tissue lipolysis and ketones, which serve to preserve muscle.

In support of this, the retention of lean mass is increased following IF regimens for weight loss as compared to continuous CR regimens in humans.

WHY SHOULD WE BE EXCITED ABOUT THE METABOLIC SWITCH ?!

The “Metabolic switch” is a precursor to a cascade of physiological responses of many organ systems including the musculoskeletal system.

This chart shows the far-reaching benefits in many different systems of the body. 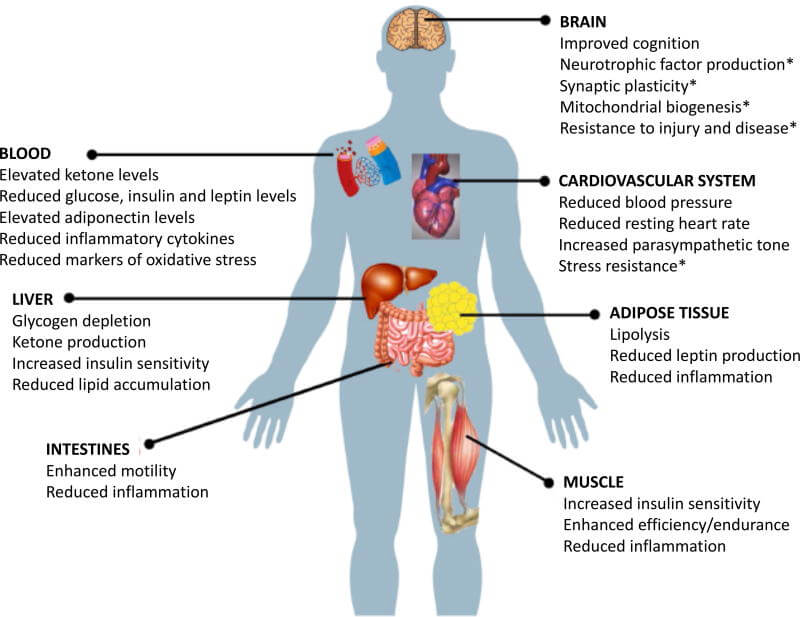 Historically, fasting has been used for both religious and medical reasons for thousands of years.

Benjamin Franklin has been quoted as saying “The best of all medicines is resting and fasting.”

Similarly, Mark Twain wrote, “A little starvation can really do more for the average sick man than can the best medicines and the best doctors. I do not mean a restricted diet; I mean total abstention from food for one or two days.”

Initial scientific studies conducted in 1914 utilized fasting for the treatment of both type 1 and type 2 diabetes. Several additional studies found an improved insulin sensitivity and glucose tolerance in people with diabetes immediately following a fast.

With caloric restriction, approximately one-fourth to one-third of the weight loss is known to be of lean tissue.

In a study of 34 healthy men randomly assigned to either a normal control diet or daily TRF (16 hours of daily fasting). During this study they maintained a standard resistance training program. The men in the TRF group showed a reduction in fat mass with retention of lean mass and maximal strength.

The studies in this article all point the the multi-faceted and far reaching benefits of the metabolic switch which occurs during Intermittent fasting.

Here are a few other fasting resources you may enjoy: 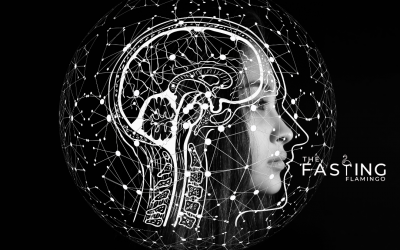 What are the effects of Intermittent Fasting on your brain and cognitive functioning?

The Effects of Intermittent Fasting on Brain and Cognitive Function Jip...

END_OF_DOCUMENT_TOKEN_TO_BE_REPLACED 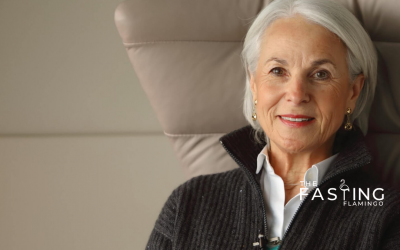 Dr. Buchinger’s brilliant insight on why we ever stopped fasting – Our top 5 takeaways

END_OF_DOCUMENT_TOKEN_TO_BE_REPLACED 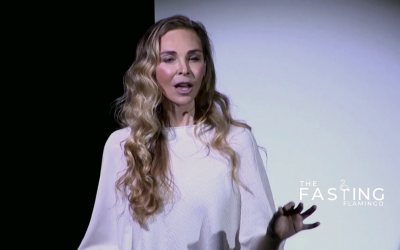 How do we change? In this pioneering talk, Dr. Shauna Shapiro draws on modern neuroscience and ancient wisdom to demonstrate how mindfulness can help us make positive changes in our brains and our lives.